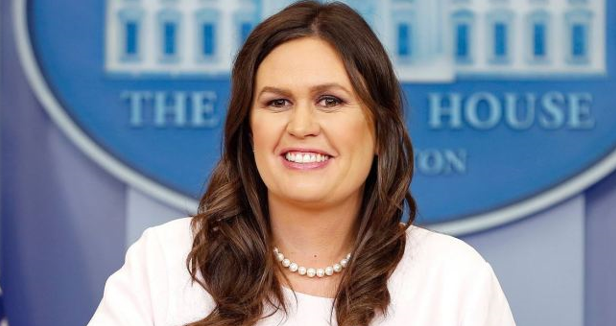 “For me it’s all about family, and it always has been.”

I can hardly believe I’m typing these words: President Trump has announced that at the end of the month, White House press secretary Sarah Huckabee Sanders is stepping down from her position. After 3 ½ years of outstanding service to her country, the press secretary will be missed. Sanders plans to return to her home state of Alabama, where the President is encouraging her to run for governor.

Naturally, Democrats are using the announcement of Sanders’s departure as yet another excuse to rip her apart. Snowflakes can’t stand that the press secretary stood her ground and refused to give in to their harassment or media bullying. After mocking the press secretary’s appearance and questioning her morals and integrity, it should surprise no one that shameless reporters, comedians, and social media users on the Left are calling for Sanders’s career to be ruined and openly hoping for the worst for her.

It’s not surprising that the hate-filled Left is stooping to this level. After all, every time the press secretary owns them, she takes away their shot at twisting President Trump’s motives to fit their anti-American agenda.

In honor of this tremendous woman, who has been known to give as well as she got, MAGAGuides.com presents this list of Sarah’s greatest hits. Sorry, Dems, but no matter how hard you think you owned Sarah, it was more like the other way around.

Sarah vs the Press

Sarah Sanders kept the out-of-control fake news machine in-hand by being tough with them. Upon hearing news of Sanders’s departure, members of the press admitted she was friendly and fair with them behind the scenes. As other press secretaries do, Sanders was loyal to the President, but that is where commonalities between her position and people who have held the position in the past end. In today’s contentious political climate, in which the opposition seems to have gone insane, Sanders’ role with the press became unusually difficult. Still, she managed these difficulties masterfully, despite facing harsh criticism from people who are hell-bent on opposing everything she and the President do or say at any cost.

CNN reporter Jim Acosta turned White House press conferences into a mockery by using the opportunity to manufacture self-serving drama. Sarah put a stop to that, saying, “This conduct is absolutely unacceptable,” and revoking his press credential. Sanders tore into veteran journalist April Ryan tried to project what she wanted to hear for her own story onto Sanders, the press secretary immediately shut her down by responding, “With all due respect, you don’t know much about me.” When it became clear that the press conferences were no longer serving their intended purpose due to Trump Derangement Syndrome, Sanders made the bold decision to break with tradition and stop wasting time with daily official press briefings.

Being a never-Trumper means constantly reinforcing the general public’s support for President Trump by displaying abominable behavior. One glaring example of this are the calls to harass Trump’s supporters and cabinet members in public. In June of 2018, Sarah Sanders and her family became targets of the Liberal mob at Virginia’s Red Hen restaurant, where the press secretary and her family went to enjoy a meal like everyone else in the restaurant. When the owner of the Red Hen chose to make a spectacle of Sanders to get press, more business, and five-star reviews from Democrats who have never actually eaten there, she handled the humiliating situation with absolute grace.

In a tweet responding to the inexcusable incident, Sanders wrote, “Last night I was told by the owner of Red Hen in Lexington, VA to leave because I work for @POTUS and I politely left. Her actions say far more about her than about me. I always do my best to treat people, including those I disagree with, respectfully and will continue to do so.” She wrote it herself, too, and didn’t ask a waiter to do it for her, as the owner of the Red Hen did when she wanted the Sanders family ousted.

Of Sanders, President Trump said, “She is a very special person with extraordinary talents, who has done an incredible job! I hope she decides to run for Governor of Arkansas – she would be fantastic. Sarah, thank you for a job well done!” We couldn’t agree more. Rob Raskin’s MAGAGuides.com and ProAmericaOnly.org would like to officially thank Sarah Sanders for doing such a fantastic job for America and for sticking to her values. Whatever you do next in life, and wherever you go, they’ll be lucky to have you.